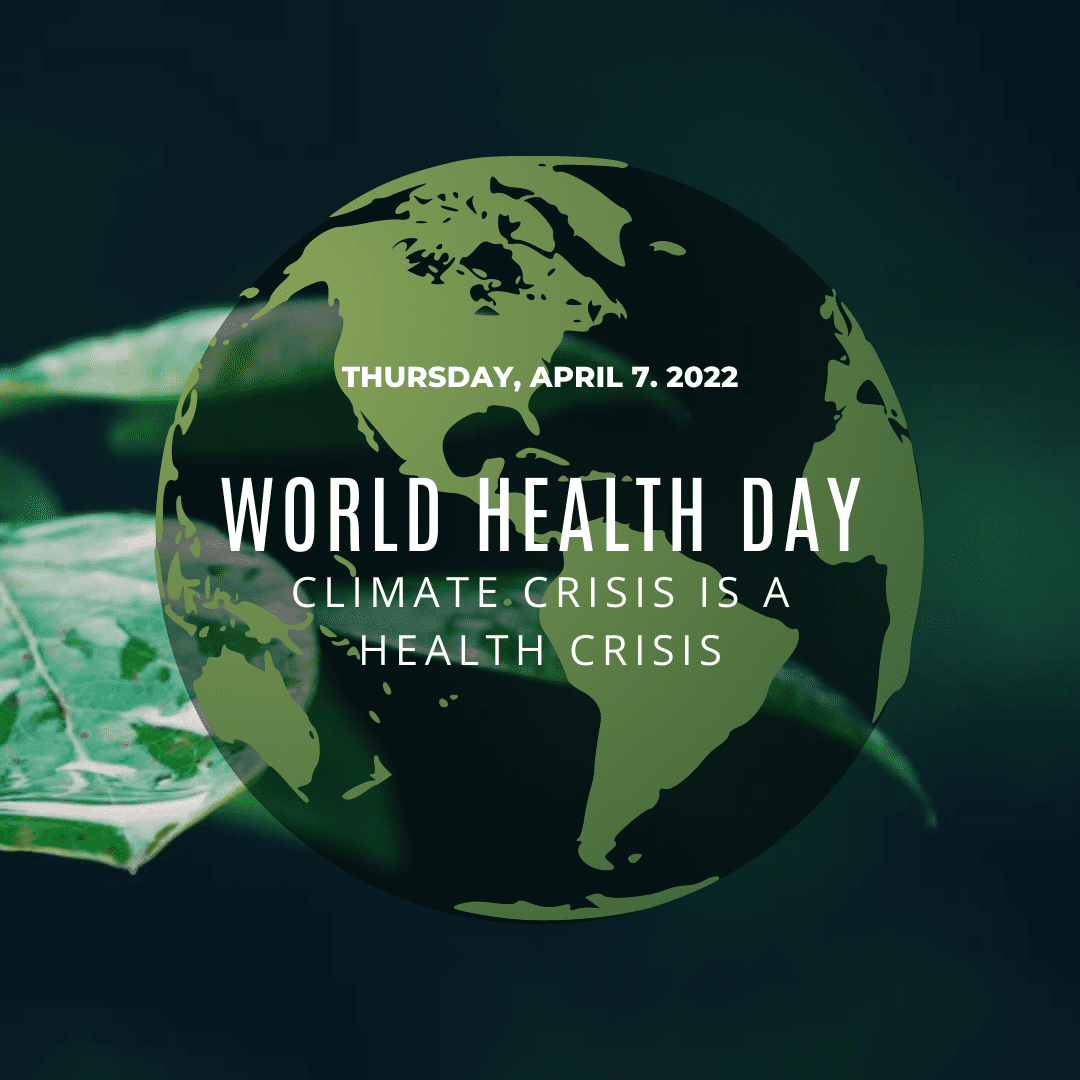 Today is world health day, and this year the focus is not only on our health but also on our planet, our environment has a direct impact on our health and well-being. The World Health Organization (WHO) aims to bring to light some of the issues our planet is facing and propose changes that we should advocate for to build a healthier planet for us to live on. WHO also estimates that more than 13 million deaths around the world are a result of avoidable environmental causes. This statistic also takes into consideration the current climate crisis we are facing.

We wanted to discuss more about this day and to bring some light on these concepts because every individual, company, and government should be informed and involved in these matters because the impact and responsibility fall onto everybody, and impactful change can only be achieved as a collective. For more in-depth information and resources surrounding this topic visit the World Health Organization website.

As the main point for this year’s campaign WHO are informing individuals of the direct impact, the current climate crisis is causing on their Health. The climate crisis is causing extreme environmental changes such as rising temperatures, an increase in droughts, wildfires, and flooding. These all have negative impacts on our health aside from the obvious increased risk of accidents and disruptions to health services there are also other effects we may not have originally associated with these such as:

So, what’s causing this crisis? Us. We are increasingly contributing to this. What can we do to help prevent this from getting worse? The state we are currently in can be improved and it’s not a case of stopping our current practices or ways of living but altering our methods. For more in-depth information on which greenhouse gases are most disruptive and the main causes of rising emissions, visit the discussion of climate action on the European commission’s site

Where does the responsibility fall?

The responsibility falls on us all as a collective, however, we can’t be blind to the fact that our contributions, despite being impactful will not be as impactful as those of large collectives which are responsible for the higher production of harmful emissions leading to this crisis such as large corporations as well as Governments who control the guidelines and laws which determine how these corporations, as well as individuals, are allowed to operate. The change will only be made if these larger figures also contribute and take steps to change the current situation. The world health organisation has laid out some recommendations for change in the different tiers such as Governments, Corporations, health facilities, mayors, and individuals. These recommendations also offer some considerations into what movements and developments we should be supporting.

What can we do?

Despite larger movements like governments and corporations being required for change, we shouldn’t undermine our contributions. Limiting this research to just our industry, it is estimated that a  shocking 16 billion to 41 billion pounds of CO2 are emitted by lawnmowers alone every year. This isn’t even taking into account other grounds care equipment which also runs on petrol and diesel engines. For a really interesting read about the lawn maintenance industry’s impact on climate change particularly in America, check out this article from PSCI

These shocking statistics alongside other well-known impacts from this type of machinery such as noise pollution, increasing cost and a negative impact on our health primarily due to high vibrations, long use, and fume inhalation have led a large majority of people to switch to battery-powered machinery. And with the development of technology allowing for these machines to boast the same power and efficiency as their fueled equivalents without the emissions, it’s clear to see the attraction. Companies have also recognised this need for change when it comes to larger Agricultural machinery and have responded by manufacturing electric tractors which, as this technology develops and the use becomes more widely used will greatly help reduce emissions produced by agriculture.

Change doesn’t always have to be exceptionally large, while a larger change is what we are aiming for, smaller contributions when done by a vast majority build together to make a noteworthy change. When it comes to environmental concerns like our emissions and wastage, we don’t have to stop the way we live, just being aware of the impact our actions have can remind us to choose alternative routes. If you’re aware of the number of emissions that comes from your car for that five-minute journey you may be more inclined to walk or even car share, healthier change doesn’t have to disrupt your way of living.

As well as this, when it comes to advocating for larger changes, knowledge is essential. When you know what you’re advocating for it’s easier to support movements and figures who align with these choices. Pushing for larger changes is an essential contribution from individuals as, without these major improvements, the current climate will remain static which we cannot afford when the need for change has become immediately needed.

Provided here is a list of resources with more information concerning movements and organisations which are providing information as well as backing the need for immediate change.