Sustainable Agriculture: How the Agriculture Industry is Working to Develop it’s Sustainability

The sustainable Agriculture movement has been growing in urgency following the current development in climate conditions as well as pushing Government initiatives to contribute towards their goal of reaching Net Zero by 2045.

The focus on the Agriculture industry is understandable, with Agriculture and forestry being responsible for around a quarter of greenhouse gas emissions alongside practices that have led to freshwater withdrawals and land and soil degradation. However, with mounding pressures fueled by increasing demand, the recovery from the Covid-19 pandemic, and current economic conditions, pushing towards sustainability is becoming increasingly difficult.

Despite the barriers, Sustainable Agriculture has developed tremendously in the past few years, and it continues to develop with innovative technology being at the forefront of this change. This has primarily been fueled by necessity as more areas face the impact of climate change.

The following are some examples of just how those working within the Agricultural industry are paving the way to sustainability. 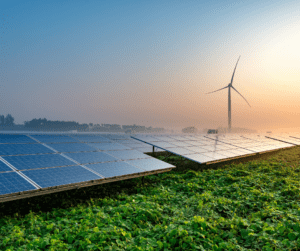 The transition to renewable is becoming more accessible the more it is adopted. The use of solar panels is increasing, while the implementation of hydropower and wind power is typically limited to large-scale agriculture, the increasing global adoption of solar power is allowing renewable energy to become accessible to companies no matter their size as the initial investment is much lower than alternative methods.

Enhancing the availability of renewable energy is highlighted in the Agri-renewables strategy for Scotland and this is set to contribute largely towards their goal.

As it stands, farmers already host 70% of Britain’s solar power capacity, this can either be on their rooftops or fields. Meaning despite a large amount of pressure being placed on the Agriculture industry for contributing to environmental issues they are also contributing largely to the solutions.

A lot of farmers are investing in their own panels or renting out their roof space or even field space because of the benefits it brings, which are long-term financial benefits. It’s no surprise, with the current increase in energy prices, alongside the decrease in the price of installing solar that many people are seizing this opportunity. 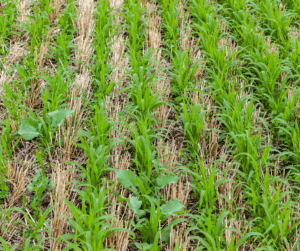 As spoken about previously in blog posts regarding the push for a reduction in emissions from power tools and machinery via battery-powered technology, farmers and Arborists are at the forefront of this shift as large users of these tools.

However, although curbing the increase in machinery pollution is essential, it’s not the only source of emissions that is posing a threat.

Regenerative Agriculture is a practice that focuses on improving soil health and biodiversity and other practices which regenerate natural resources.

This is a popular method of reducing emissions as when farmers cultivate their soil, they also release carbon dioxide into the air. It is estimated that 15-20% of the CO2 in the world’s atmosphere is due to plowing, to combat this, regenerative agricultural practices include less or no tilling, organic fertilisers, and using cover crops all of which are aimed to maximize biodiversity, minimize chemical usage, and lead to less soil erosion.

This is not a one fits all method, and a lot of factors can contribute to how effectively these methods work in different situations alongside implications that may arise from them, this ties into the following topic of the utilisation of technological advancements and innovations. 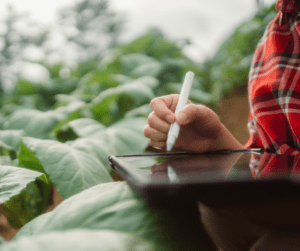 Digital farming is driving the industry and its pursuit of sustainability forward. Concerning the discussion surrounding regenerative agriculture, assessing the suitability of practices before implementing them on a large scale is essential as well as having ways to monitor progress, this is where innovations in technology come in.

Digital farming is aimed at maximizing benefits while simultaneously utilizing resources more efficiently. Growing in popularity, according to a Mckinsey survey, the vast majority of companies have utilized digital farming, their survey demonstrated 95% of companies interviewed have a digital-farming offering. But the returns were varied.

One commonly known digital farming platform is fieldview. This platform is designed to analyse different types of data from weather to current performance and past data and more on one platform. This software aims to allow farmers to make more informed decisions as well as maximize their productivity with customizable field plans. This is just an example of how technology is assisting in identifying alternative practices which prioritise both the user and the environment.

In larger scale Agriculture we are seeing even more impressive technological changes which are aimed at helping improve sustainability, one of which includes high-tech, commercial-scale greenhouses powered by technology that allows for the environment to be fully automated leading to more variety being able to be locally grown. This, in turn means less produce will be required to be shipped, reducing shipping volume will have a largely positive environmental effect. This method is often accompanied by additional sustainable efforts such as water reclamation and hydroponics to reduce water within production.

Looking into the future, continuing to fund and encourage technological innovation in this industry is what will continue to drive sustainability efforts. This has been recognized within many government strategies and the Agri-renewables strategy for Scotland has labeled research and innovation in this sector as a “Fundamental requirement”.

Although vast advancements have been made toward the effort for sustainability, individuals and the government alike are aware that there is a long way to go before it is where it needs to be. Particularly with ambitious goals such as net-zero and an increase in demand from the public. As climate issues are being pushed to the forefront of the media and consumers’ minds, consumers are displaying a more active role in not only their own sustainability efforts but also for recognizing the sustainability of corporations. Consumer pressures are causing a shift in how businesses make their decisions as consumers prioritize brands that preach transparency and whose actions align with their own views and values.