Home | Blog | Why Go Cordless? A Look Into The Advancements Of Cordless Gardening Tools 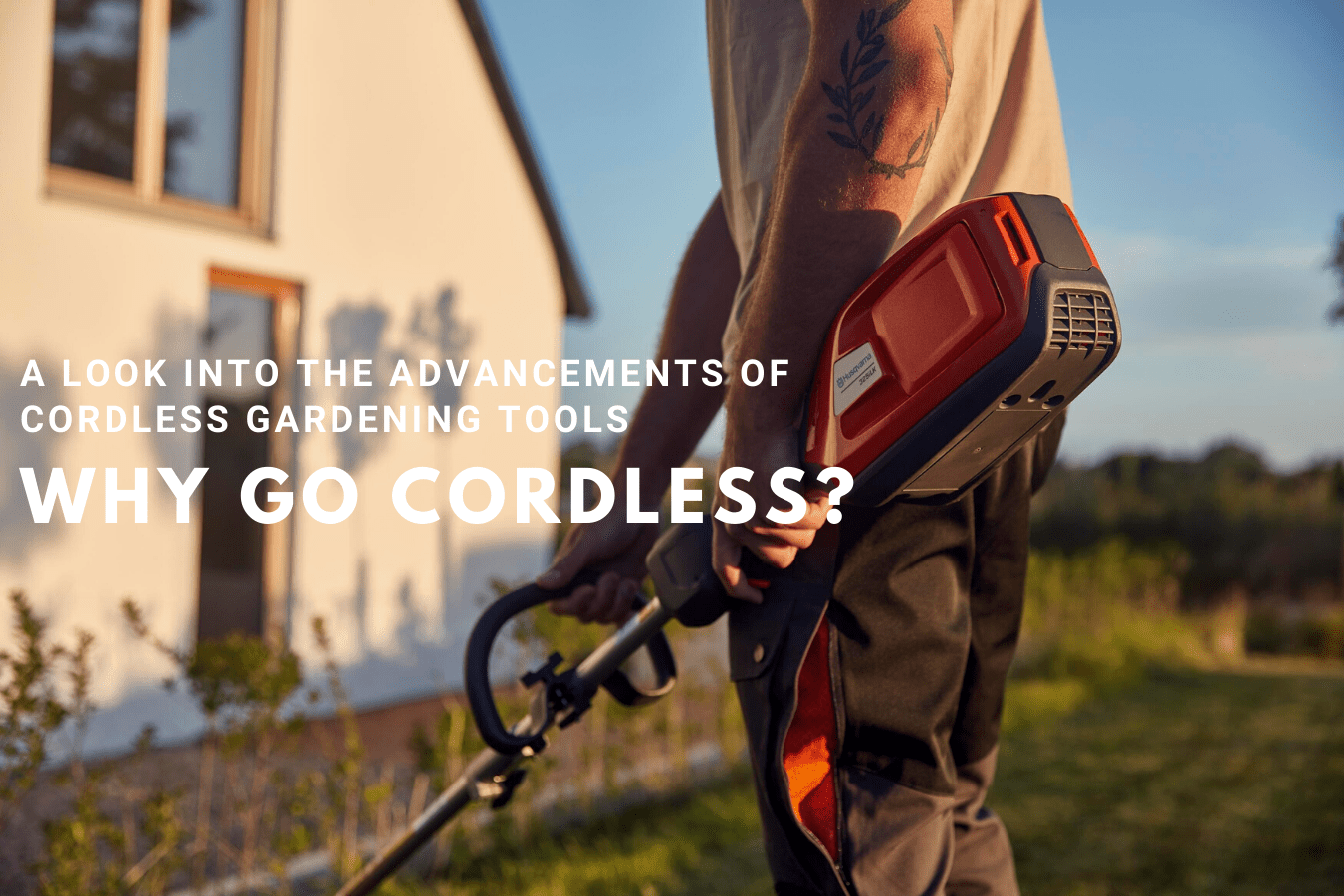 Why Go Cordless? A Look Into The Advancements Of Cordless Gardening Tools

Going cordless has developed from mobile technology into the agricultural and Garden care sector and now companies are developing larger tools with the same strength and power, just cordless. This shift didn’t happen overnight. Cordless power tools originated in 1961 where the first cordless, rechargeable drill was invented. From there they went bigger, developing the first electric powered mower in the 1930’s.

This trend took a while to catch on and it wasn’t until the mid-2000’s that the first cordless leaf blower was developed. Since then, great strides have been made concerning battery operated tools. Brands such as Husqvarna and Honda are now developing tools such as Brush cutters, Leaf blowers, Chainsaws etc. which despite being battery powered are boasting the same power as their petrol fueled alternatives.

What tools are Cordless?

Some of the most commonly known brands which have cordless tools include Honda, Husqvarna and Stihl. They offer a range of different cordless/Battery powered machines including but not limited to:

These tools can be purchased as individual units. For example, if you just need a hedge trimmer and that’s all you need it for you can look into purchasing a cordless hedge trimmer. However, to save people purchasing three or four tools for one household which can take up a lot of space and add up to quite an investment. Instead, Multi-tool or ‘Combi’ systems have been developed. In this, a base system is typically sold with a variety of alternative attachments. This means you can have change your tool depending on your requirement without having to store a shed full of tools.

The benefits and reasoning why people are more frequently making the switch from petrol to battery powered machinery can be quite obvious. In the long run there will be cost benefits, particularly considering that the majority of battery-operated tools (within their respected brands) will operate off the same battery. Meaning you can just share one battery about with all your tools, leading to more savings.

As well as this the ease of use is the convincer for some people. Simply putting your battery in and wondering off to get your job done sounds like an easier task than plugging in, fueling up and then amending your method or your plug position every time you run out of cord or having to make a trip in the middle of your task when you run out of petrol. As well as this there are numerous other reasons this change is increasing in popularity which you may not have initially considered.

One of the largest and widely appreciated benefits of battery-operated tools is improved environmental effect on the environment. Petrol garden tools comprise up to 45% of off road petrol emissions. In comparison, battery powered tools have zero emissions. This slow switch to battery powered machinery will make a huge, long-term difference on our carbon footprint and will aid in the current climate crisis we are facing.

Despite this attractive benefit being zero emissions that doesn’t mean that its existence comes without an environmental toll. The battery’s used to power these devices are typically made from Lithium-ion, the same as the batteries in our smartphones or battery powered cars. These battery’s are less damaging than petrol and are a great step towards more sustainable living. However, they aren’t guilt free. As the world shifts to battery usage there is an increasing environmental problem as a result of the processes used to obtain these materials, which require using copious amounts of water resulting in difficulties in surrounding areas.

As well as this, as they stand they are unable to be recycled. Although in this specific context the battery lasts an exponentially long time, with some models withstanding up to 1500 charges. However, like all things, they will at some point need to be replaced. Research is currently being conducted into how to safely recycle these battery’s and ultimately try to develop a method which allows for the lowest environmental impact throughout the battery’s entire lifecycle.

This topic is discussed in depth in Wired’s article: The spiraling environmental cost of our lithium battery addiction. This is not to take away the fact that this method of power is an improvement from petrol and is currently allowing us to decrease our environmental impact slowly. Further research into how we can sustain this long term will be the next steps in battery powered machinery.

Battery powered tools and equipment emit lower noise levels than their petrol fueled alternatives. Meaning it’s more convenient to use them at any time, around populated or sensitive areas. You can get up at the crack of dawn and get on with your garden maintenance without later receiving an abundance of neighbor complaints. Or if you’re a contractor working in public areas it gives you more flexibility about where and when you work as noise disturbance will no longer need to be a consideration.

For those frequently working with power tools or in an environment surrounded by them, the switch to battery powered equipment could aid their health in the long term. The toxic fumes which are emitted from the typical petrol-powered tool harms more than our environment. It has been discovered that frequent exposure can lead to long-term health concerns. Studies have discovered just how harmful these emissions are for our health in comparison to the Battery powered, cordless alternatives which have zero emission use.

As well as the long term benefits, there’s also the immediate benefit of accident prevention. Save yourself fumbling over wires or accidently running over the cables and just get rid of them all together. With Agriculture, forestry and construction displaying significantly higher workplace injuries than any other industry, this change could decrease these statistics, if only by a little.

As well as eliminating the risk of cord related accidents, there is also the added benefit of weight. Typically, the battery powered tools are lighter. In the context of chainsaws, this lightweight makes the machines easier for people to handle and maneuverability is increased. This makes it easier to tackle more difficult jobs as well as maintaining better control of the equipment which, with some luck will lower your risk of accidents occurring.

If cordless hoovers have taught us anything its that the one thing which acts as a barrier between battery operated tool domination is our forgetfulness. There’s nothing more frustrating than going to do something only to find out you can’t because the battery’s low. This isn’t really a product drawback just one of the requirements of owning the tool. With a bit of forward planning, ensuring your battery has been charged before you use it, as well as determining how big of a job you have vs your tools battery life and allocating enough time if a recharge is required will allow you to fully reap the benefits of the cordless tools. Or alternatively, if you are using the products commercially investing in more battery’s and simply swapping them out as you go will give you continuous usage.

In general, the benefits outweigh the potential considerations of remembering to charge the battery. The current studies into improving the environmental effects of the battery’s are pushing this change into a necessity as we further develop ways on improving our current climate.

So, with all these benefits, would you change to a battery powered tool? Browse our range of battery-operated tools including all of the machines mentioned within this post alongside others or get in touch if you’re looking for something specific.